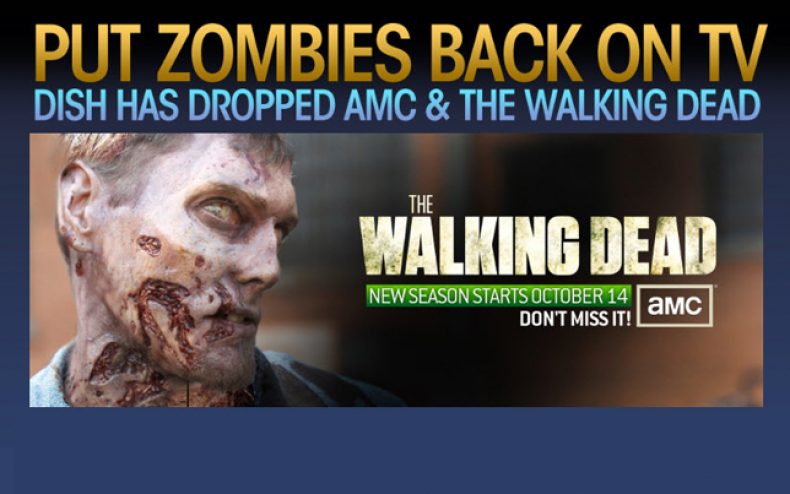 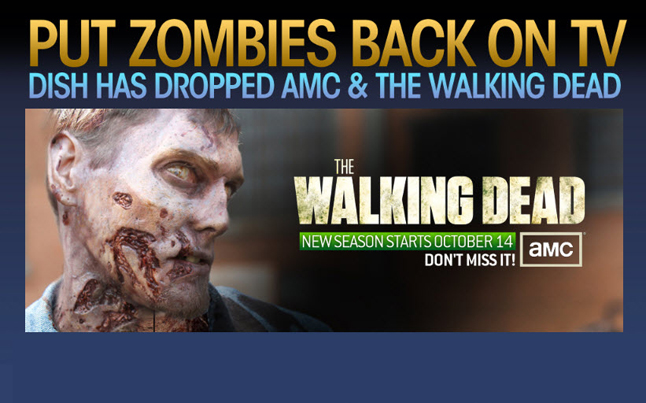 Dish Network recently dropped the AMC Network from its lineup, and not only are fans upset, but AMC is trying to fight back. The fight between AMC and Dish actually goes a little ways back, and AMC believes this fight is due to an older lawsuit between the companies. In fact, AMC has a campaign going urging people to leave Dish Network in protest of them dropping them. According to the campaign, Put Zombies Back, AMC has the following facts to share.

Did you know that AMC just received the most Emmy nominations of any basic cable channel? 34 nominations for shows like “Breaking Bad”, “Mad Men”, “The Walking Dead” and “Hell on Wheels”. Yet despite the popularity and demand for these shows, DISH continues to black out AMC, IFC, WE tv, and Sundance Channel. To add insult to injury, DISH continues to charge you for them; you just no longer receive them.

DISH’s decision to drop AMC, WEtv, IFC and Sundance Channel had nothing to do with our fees, or our shows. In fact, unlike almost every other dispute you see between providers and programmers, and despite DISH’s misleading claims to the contrary, this is not about fees.

The simple truth is that DISH is using their consumers as pawns to attempt to gain leverage in a lawsuit involving an old and unrelated business venture that has nothing to do with AMC, nothing to do with our shows or fees, and certainly nothing to do with DISH subscribers, who just want to watch the shows they love and are paying DISH for. You will not see any AMC Networks’ shows on DISH any time soon.

In other words, since DISH’s reason for depriving you of AMC programming is based on a lawsuit that won’t be resolved for a long time, this problem won’t be solved shortly, unlike other disputes between programmers and providers, which typically are resolved in a matter of days (weeks at most).

If you want to watch “Breaking Bad”,” Hell on Wheels”, “The Walking Dead”, and “Mad Men”, you will have to switch TV providers. We can help you do that. The good news is, every other cable, phone and satellite company — except DISH — carries AMC in their basic package. Many providers are offering special incentives for people to switch. Call now at 1-855-2-DROP-DISH (1-855-237-6734) and let us help you gain access to the shows your friends and neighbors are watching.

We can help you regain access to AMC, IFC, Sundance Channel and WE tv by calling the above number, visiting www.switchfromdish.com or contacting us on Twitter @AMC_Assist.

Thank you for your support of our shows and our networks. We want you to be able to watch the TV you love, and we’ll do whatever we can to help make that possible.

Check out what people are saying in our forum about Dish Network!

According to the Washington Post, you can really get the message at the end of the video.

“ZOMBIES DON’T BELONG HERE,” reads the text at the end of the video, as a zombie drags a dismantled Dish satellite dish behind him. “PUT THEM BACK ON TV.”