Scenes You Will Never See On The Walking Dead TV Series 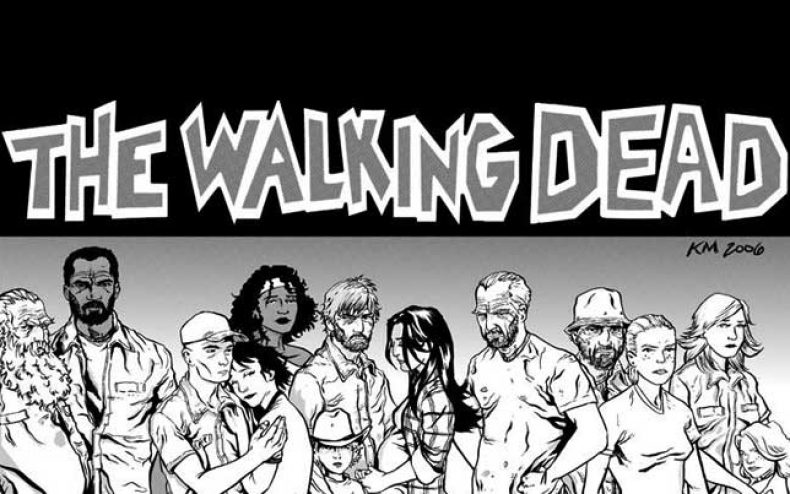 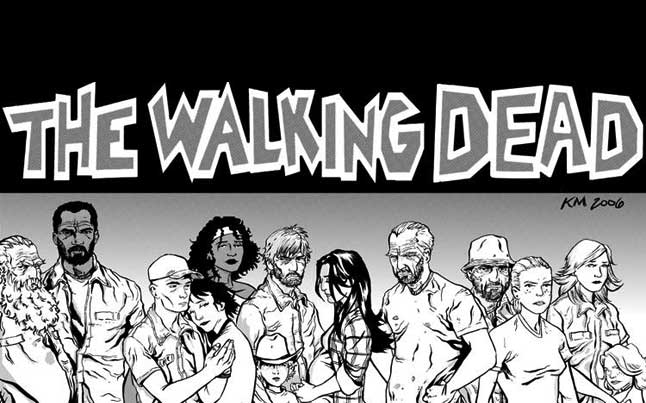 Yes, there may be some HUGE spoilers in here but remember the show is very different from the The Walking Dead comic, so this stuff may not come up in the show at all. In any case, I can’t imagine the network’s censors (or lawyers/standards and practices goons) allowing the following events to be portrayed on basic cable.

1. Herschel’s Daughters: We don’t see the murder taking place in the comics, only the aftermath – two girls, no more than 10 years old in a pool of blood with their severed heads beside them. The heads then revive as zombie-heads, despite the fact that the girls were never bitten.

2. Michonne’s Imprisonment: Michonne is captured by the evil “Governor” and kept chained up, half naked, in a dungeon for days. The Governor beats and rapes her repeatedly.

3. The Governor’s Daughter: The Governor has a daughter, about 5 years old, who has become a zombie. Not only does he chain her up and feed her the body parts of his victims, but he also removes her teeth and makes out with her…and he presumably has a necrophiliac/incestuous/ relationship with her.

4. Michonne’s Revenge: She escapes from her cell and finds the Governor where she takes her vengeance. She bores holes into his shoulder with a power drill, rips his fingernails out with a pair of pliers, hacks his arm off with her sword. She then goes on to cauterize the stump with a blowtorch, and finally she takes a spoon that she shoved up his rear end to gouge one of his eyeballs out.

5. Tyreese’s Execution: Tyreese is captured by the Governor who leads an armed convoy to the prison where Tyreese is seen in shackles. He says that if Rick and the others do not open the gates and surrender the prison to the Governor’s people, he will decapitate Tyreese. The ultimatum is ignored, and the Governor attempts to behead him several times. The first strike does not do the job. Nor do the 2nd, 3rd, or 4th. I think the 5th time does the trick. Tyreese’s head then revives as a zombie.

6. The Highway Attack: Rick, Carl, and Abraham are camping on the road one night when a small group of roving sociopaths finds them. They restrain Rick and Abe at gunpoint, and begin to strip Carl explaining that they plan to rape him while his father watches. They have Carl down to his tighty-whiteys when Rick breaks free and the scuffle allows Abe to overpower his captor and Carl is saved. I think they kill all but one of the attackers immediately, but Rick saves at least one of them for special treatment – he basically disembowels him/them alive, and then hacks off chunks of him/them until he/they are dead.

7. The Cannibals, Pt. 1: A group of strangers stalks Rick’s group and abducts Dale. (Dale is in a sorry physical state already. During the stint at the prison he was bitten on the ankle where Rick came up with the idea to amputate the injured leg in an attempt to save Dale’s life. It worked perfectly, but Dale had to learn to get along on an old-fashioned, pirate-style wooden peg leg.) The stalkers knock Dale out when he wanders into the woods one night. He wakes up to find the strangers have hacked off his remaining foot and find’s it cooking with some of the cannibals eating portions of it. They tell him they will keep him alive as long as possible, hacking off a little more every day or two because there are no refrigerators to keep meat fresh. Dale informs them of the reason he was wandering in the woods alone, which was that he had been bitten by a zombie and wanted to die alone. The cannibals find out that they have been eating tainted meat.

8. The Cannibals, Pt. 2: The cannibals decide not to eat any more of Dale for obvious reasons, but they will use him to panic the rest of Rick’s group. Rick’s group wakes up in the morning to find Dale laying outside their temporary shelter missing a leg. Rick decides to show the cannibals they are messing with the wrong people and he leads an attempt to surprise and capture the cannibals which is a total success. Rick and the others proceed to tear the cannibals apart slowly using just their hands at times.

9. Jessie and Ron: Rick and his group have found a walled off community called the “Alexandria Safe-Zone” that has survived, more or less safely, behind their walls since the world started to fall apart. The people in the community have lost a few family members and friends, but they have not experienced ANYTHING like the brutal never-ending chain of horrible loss, torture, death, murder, and mutililation that Rick and his group have endured.

The leader of the community realizes the ordeal Rick and his group have endured has made them far more vigilant to possible threats and vulnerabilities, and he invites Rick’s group to live there. He also makes Rick the “Constable” of the community. Shortly after accepting his new job, Rick finds out a man in the community has been beating his wife and child. Rick beats the living daylights out of the guy, and the residents are horrified by the violence. Rick is restrained and possibly suspended, but he insists the guy is a threat.

The man gets a knife and murders the leader’s wife and the leader then realizes Rick was right, orders Rick to kill the man, and then steps down and puts Rick in charge. Rick begins a relationship with a woman named Jessie, the wife…i mean widow…of the man he just killed. She and her son Ron move in with Rick and Carl.

The community comes under attack by hundreds of zombies, and the wall is breached. Zombies pour into the safezone and the residents lock themselves into their houses. Rick, trapped with Carl, Jessie, Ron, and Michonne, decides to abandon the community and everyone in it (except the people trapped with him). They repeat Rick and Glenn’s old trick, smearing themselves with zombie guts, and leave their house in an attempt to sneak past the swarm of zombies. Rick is holding Carl’s hand, Carl is holding Jessie’s hand, and Jessie is holding Ron’s hand.

Rick has forgotten that Ron isn’t like Carl, he hasn’t become as tough or brave as Carl. Ron is terrified and begins screaming that he wants to go back to the house. The zombies immediately grab the boy and begin devouring him while he screams “MOMMY!” Rick tells Jessie she can’t do anything for Ron now and she must run. The zombies then begin to eat Jessie, and they are reaching for Carl. She still won’t release her grip on Carl, who is beginning to panic. Rick pulls out his trademark hatchet, and with 3 quick strikes, he almost completely severs her hand at the wrist. He and Carl then continue their escape attempt. Later on Abe and Glenn will find and kill a zombie-Jessie, the severed hand still dangling from the stump.

10. Carl’s Accident: Just after the hand-removal, the former leader of the community is mobbed by zombies and as he goes down he fires his handgun wildly several times. Rick and Michonne duck and are not injured, but a turn of the page reveals a huge 2-page spread, showing Carl, still wearing his dad’s hat. There is a massive hole where his right eye, temple,and ear should be and a significant portion of his head is missing. Carl says “Dad?” in a faint voice, then collapses.

Note: For those who haven’t read these issues (or any) of the comics yet, I feel it would be cruel to tell you Carl got half his face blown off and not tell you whether he is alive or dead. Here’s the rest of the story, in a nutshell…

Rick realizes that Carl is still breathing, but it is clear he will die without immediate medical attention.  He decides he must abandon his plans to abandon the community and he takes Carl to the home of the community’s doctor. He tells the doctor he will stay outside and hold the zombies off for as long as possible. Michonne then joins Rick and they make a desperate last stand against a couple hundred zombies armed with only her sword and his hatchet.

Abe sees Rick and Michonne and he realizes they are going to be killed, and runs out to help them fight. Some of the residents gradually join in, and soon there are 10 or more people fighting 100+ zombies, armed with clubs, axes, bats, hatchets, hammers, crowbars, and a samurai sword. The battle is surprisingly short and leaves hundreds of dead zombies piled up around the doctor’s house.

Glen, Andrea, and a couple of other guys were trapped outside the community’s walls behind the zombie horde since the attack began. They manage to lure away most of the hundreds or thousands of zombies still outside the walls, and they return to the community to help clean up. Rick begins plans to strengthen the walls, set up defensive obstacles, barricades, trenches, and plans to also arm everyone in the community. He is thinking this way in part because Carl obviously can’t be moved, and in part because he is genuinely amazed that a dozen people could kill hundreds of zombies in a few minutes using no firearms at all.

Carl lays in a coma for several days, then wakes up and asks “What happened to me? Where’s Mom?”. Whether he will survive is still unclear, but he apparently doesn’t remember the events of the previous several months, including his mother’s death at the prison. (Carl asking these questions is literally the last panel of the last page of the most recent issue I have read – as of August 19, 2011 – but I will read the newest issue of The Walking Dead comic tonight)

I want to thank Fatbrett2, one of our community members for this contribution. You can see his original post here in our forum.

A big fan of The Walking Dead television series. In my spare time I enjoy blogging and simply hanging out. Oh and lets not forget, Go NY Giants!
You might also like
CarlGovernorComics