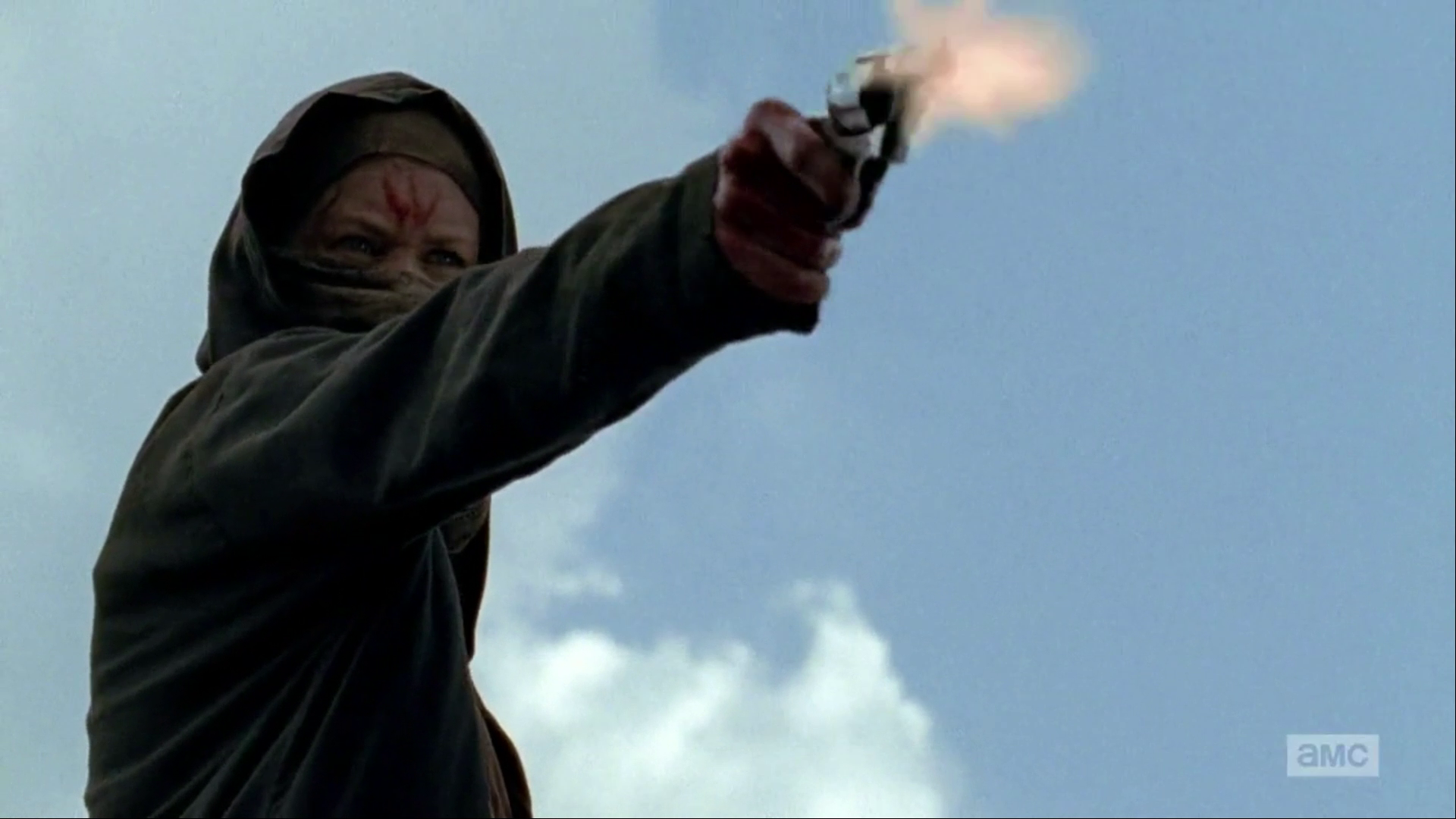 Years from now, when those of us still watching the show are complaining about how horrible Season Twelve is, this is one of the episodes we’ll be bringing up while saying “Remember stuff like this? That was great.” During the summer AMC released a few promo videos where cast members discussed what they felt the greatest moments of their characters were, and it must have been a great temptation for Melissa McBride to NOT mention this episode. From this point forward, whenever they debate what Carol’s defining moment is, this is the one the majority are going to cite.

The first twenty minutes of this episode were so calm and mundane and something felt off about it….something was missing, but I couldn’t put my finger on what. Then I remembered there were  supposed to be 3,974,335,061 zombies tearing this place apart by now. That cliffhanger had vanished. What was going on? Did the walls work THAT well? 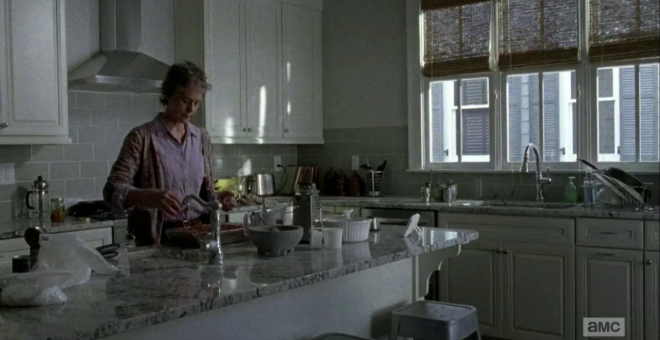 Maggie started talking to Deanna about something I don’t care about. Then Carol was in the kitchen, talking about something else I don’t care about. In the same kitchen was Carol’s neighbor, whom we see for one of two shots, the second more memorable. In this first one, Carol chides her for smoking. Some have pointed out that eventual lung cancer should be the last of these people’s worries, but there’s a more immediate reason to quit: unless Alexandria has a cigarette factory AND a tobacco farm AND a full staff running each, this woman is eventually going to burn away every single cigarette in existence. Then what’ll she do? She’ll hit withdrawal and turn into Crazy Nick, and I’ve had enough of him. All this is moot, though, thanks to scene #2. 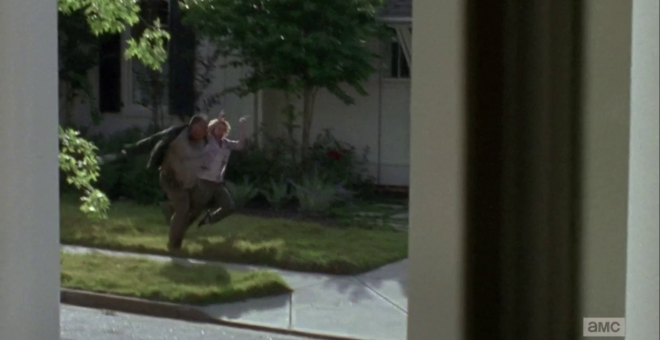 This is the second scene with the smoking woman. By now the show has been on for twenty minutes and it looks to be all filler. If anything’s going to happen, it’s going to be courtesy of the zombie horde, and that’s nowhere to be seen. Carol puts a pie in the oven, sets the timer, stares outside at the smoking woman…..and then A MANIAC RUSHES UP AND FATALLY STABS HER WHILE THE BEAR McCREARY MUSIC SUDDENLY RISES FROM NOWHERE. It’s the Wolves! The Wolves picked NOW to attack!

We were promised the Wolves in this season, and now I feel stupid for not expecting them, but it was a mistake anybody could make. I have to believe they frontloaded the season with this giant swarm of Walkers so we wouldn’t be thinking about the Wolves until they sucker-punched us mid-crisis…which is genius. As for the horn, the Wolves set a trailer truck against one of the fences, and there was a Walker inside leaning on the air horn which had to be shoved aside. 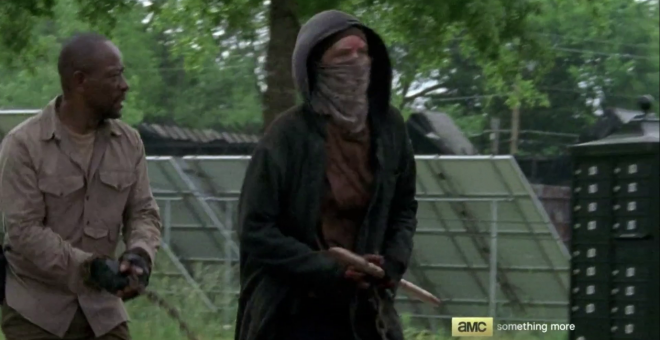 Carol comes to the realization the Wolves are marching in with knives because they must not have guns yet. If they discover the armory, it’s all over. We’ve seen her in action before, but never like this: she kills a guy, takes his robe, smears a W on her forehead with blood and charges down the street in disguise, sneaking up on the Wolves attacking other people and bashing them in the head one by one.

Morgan is unfortunately cornered by about six Wolves, who don’t immediately kill him because they….seem to know him. In fact, every guy with a “W” and a smelly shirt recognizes Morgan in this episode. We’ll hopefully find out more about that later, but for now, the Wolves just stand around while Morgan konks them all out with his big stick. They must travel in numbers because they’re too stupid to fight individually. 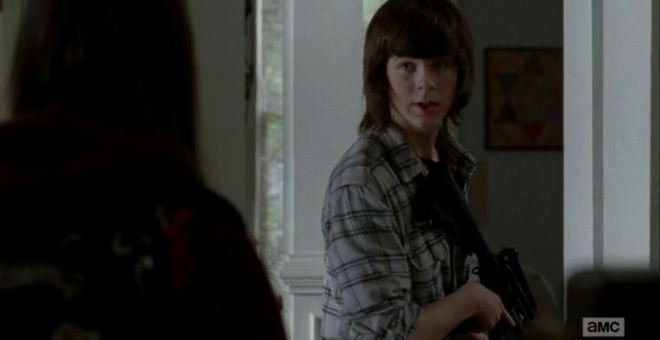 Carl, being a member of the first generation to grow up having to fight for life every second, immediately springs to action and strikes a defensive pose with a gun. He’s about to slaughter whoever’s at the door when he discovers it’s Enid, the girl who — the opening sequence established — grew up outside of Alexandria. She’s a battle-hardened turtle-eater just like him (come on, Carl would totally eat a turtle too), but Carl doesn’t know what we know and tries to “protect” her fragile femininity, which she finds offensive so she sneaks out the door later.

She’s kind enough to leave a cryptic note for Carl, “Just Survive Somehow.” Hey…..JSS! Thanks for letting us put it together ourselves and not have Carl say the acronym while looking at the note. If this was a broadcast show, a network note would have mandated that he say it. 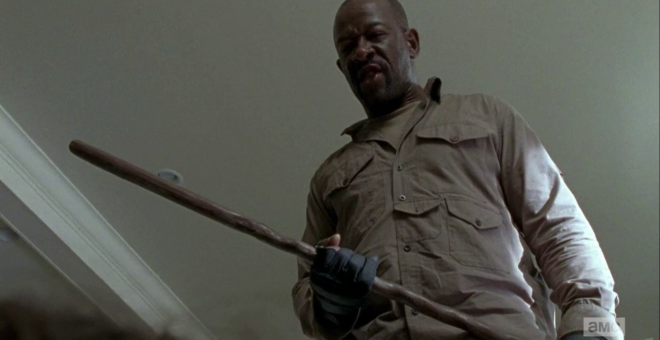 Thanks to Carol’s badassery, she and Morgan make it to the armory and start distributing the guns to the citizens. Morgan catches another Wolf with rope, but Carol just coldly shoots him as soon as she gets out of the armory. The rest of the episode is mostly the remainder of Walkers getting picked off, though there’s also something about a chubby psychology major attempting surgery because everybody demanded she do it. It didn’t go well.

Gotta wonder if Morgan actually killed the man at the end of the episode or if he showed mercy (my bet is on mercy). Gotta laugh at Queen Deanna, who chose to cower inside the truck for the duration of the attack. Then what happened? Well, the pie was done, so Carl took it out of the oven. 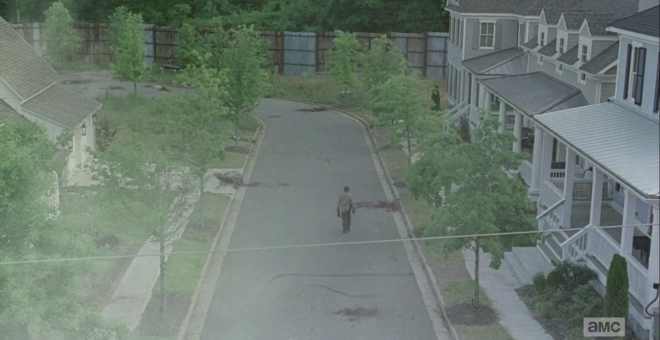 As Carol slowly walks down the street, now strewn with the bodies of the attacking Wolves, she reflects on the events of the day and having opened the doors of opportunity for fifties-aged action heroines with butch haircuts — Jamie Lee Curtis can now star in The Expendables 4. And as Carol stood solemnly over the now motionless body of her neighbor, gut split open and pack of cigarettes spilled into the street, I have to imagine this was going through her mind: