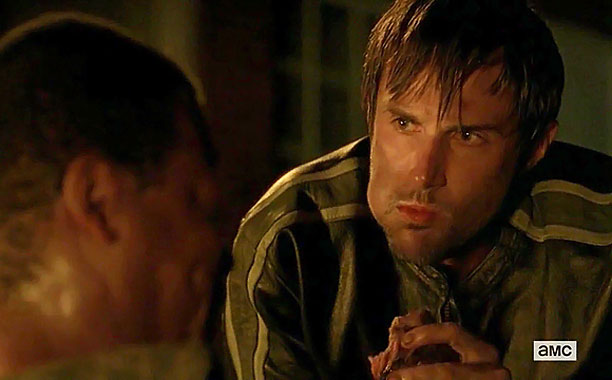 As Rick promised, Gareth met his bloody end at the edge of a machete with a red handle Sunday night, after a storyline that only lasted four episodes. Actor Andrew J. West said he was surprised at how quickly things wrapped up.

“It’s pretty shocking! There were a bunch of surprises. It was a one-episode deal with their option to bring me back for season five. I got a call from showrunner Scott M. Gimple, saying, ‘We’d love to have you back, but just so you know, Gareth will be killed in episode three,’ West told The Hollywood Reporter.

Although West said he was happy about how the role turned out, he had grown to love playing Gareth and would have like to play him longer.

“I hope that for as horrendous and vile as Gareth can be in certain moments that there is a little bit of confusion on the part of the viewers in terms of how to feel about him. I hope there are some conflicting feelings about how much they despise or dislike this character. I would have loved to have seen more of Gareth’s backstory and to see him ride off into the sunset,” he said.

West said that although Gareth’s death scene was intense to film even though it involved Andrew Lincoln hitting him with a rubber machete.

“They had to get shots of Andy actually hitting me with the machete because they didn’t know exactly how they’d cut it together. So they wrapped me up with padding around my torso, and they gave Andy a rubber machete and just had him beat me with that thing. It doesn’t hurt at all because I got the padding and it’s rubber, but you feel that pressure, and you feel how intensely he’s swinging,” West said.

Although West admitted Gareth “needed to go,” when asked if Gareth deserved what he got, West said he didn’t know. For him the more interesting question was what changes the experience of dealing with Terminus will cause in Rick and the others.

“It’s going to be interesting to see what kind of effect Gareth and the Terminus people have on the psyche of our heroes moving forward,” he said.

One final thing. Tainted meat? Probably not a thing. In a separate interview with The Hollywood Reporter, the show’s special effects guru Greg Nicotero said that it’s unlikely eating Bob would have caused the Hunters to change.

Poll: Your Favorite Scene From ‘Four Walls and a Roof?’

The Walking Dead Episode 503 ‘Four Walls and a Roof’ Preview Clip, Pics and Hints at a Shocking Scene
Be the first to comment!
Leave a reply »