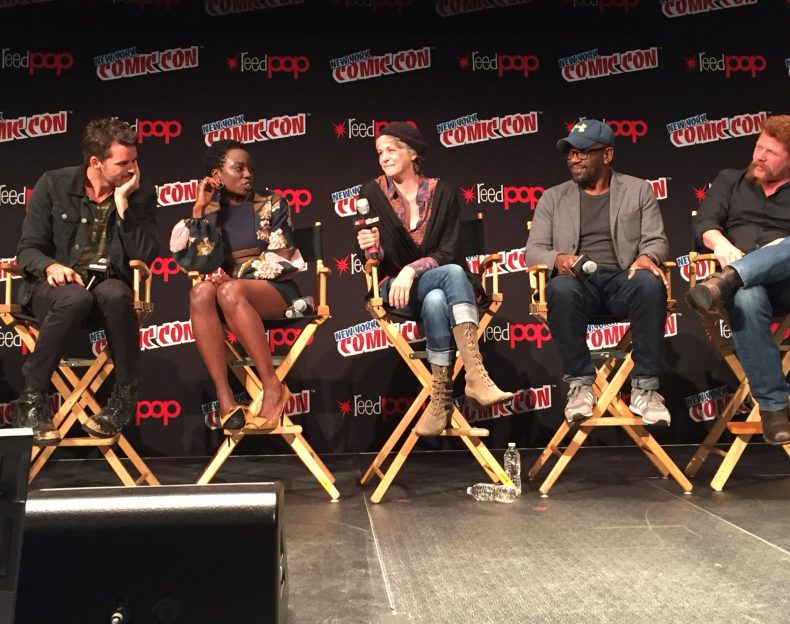 The NYCC Walking Dead panel was held earlier today. In attendance were showrunner Scott Gimple and all the major cast members from the series.

Scott started things off by covering the generalities. “In putting together these episodes, I will say, this season…the performances this year are astounding. The actor this year are the star of the show. Be on the look out for some amazing performances, some really weird creepy strange walkers.”

Gimple was asked if we find out who Negan bashed to death in the premiere (because with this show, you need to make sure they aren’t deliberately withholding that answer yet again). He said “We do indeed.”

Jeffrey Dean Morgan doesn’t think the villainous Negan is that different from most of the other characters. “To have somewhere to go, you have to believe in what you’re doing. What he is doing is essentially the same thing these people are doing. He just happens to carry a baseball bat who he loves dearly.” Rick’s got a kid, Glenn’s got a wife, Negan’s got a bat.

Speaking of Glenn and Maggie…”Glenn and Maggie are classic,” said Steven Yeun, with Lauren Cohan sitting beside him. “If you were to look at the circumstances, you could argue that having someone is a danger but I think that — what Glenn and Maggie have — they’re better. They’re greater when they’re together.” Cohan added, “We were pretty incapacited knowing that somebody was going to be hurt if we did anything. I can never say how she would have handled it differently.”

How’s Carol? Melissa McBride says despite being saved by Morgan, suicide may still be on her mind. “Every step she’s taken up to this moment has just devastated her up to this point. What is it about this world that makes us want to survive so much? That’s a huge question.”

Lauren Cohan hyped up the upcoming episode this way: “It’s so unexpected, jarring, and destabilizing. We will see how people deal with what they could and should and would have done.”