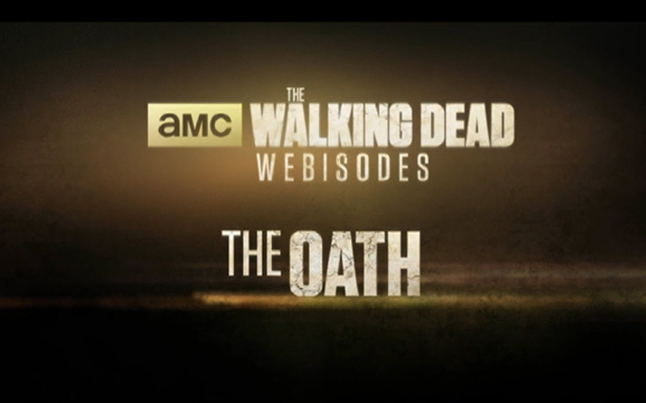 The new Oath webisodes are now up and ready to watch for all you Walking Dead fans out there. The Oath, the newest webisodes from Greg Nicotero, are mini online episodes that shed light on other stories that are happening during the zombie apocalypse.

The Oath webisodes are below for you to check out.

The Walking Dead: The Oath tells the story of the lone survivors of a massive walker-attack, Paul (Wyatt Russell, Cowboys and Aliens) and Karina (Ashley Bell, The Last Exorcism), who speed across the countryside, frantically searching for an aid-station as one of them slowly bleeds out from a wound. Finally coming upon a hospital that has not been overrun at first feels like a blessing, but could soon turn to misfortune, as a seemingly benevolent doctor (Ellen Greene, Little Shop of Horrors) may hide a darker agenda.

In the first part of The Oath – “Alone”, Paul and Karina escape their ravaged and overrun camp, but a mortal injury sends them on an urgent mission to find medical help.

In the second part of The Oath – “Choice”, Karina encounters an unexpected survivor in the medical facility as Paul’s health deteriorates.

In the third and final part of The Oath – “Bond”, Karina and Paul are forced to make life and death choices.

A big fan of The Walking Dead television series. In my spare time I enjoy blogging and simply hanging out. Oh and lets not forget, Go NY Giants!
You might also like
cold storageGreg NicoteroExtras