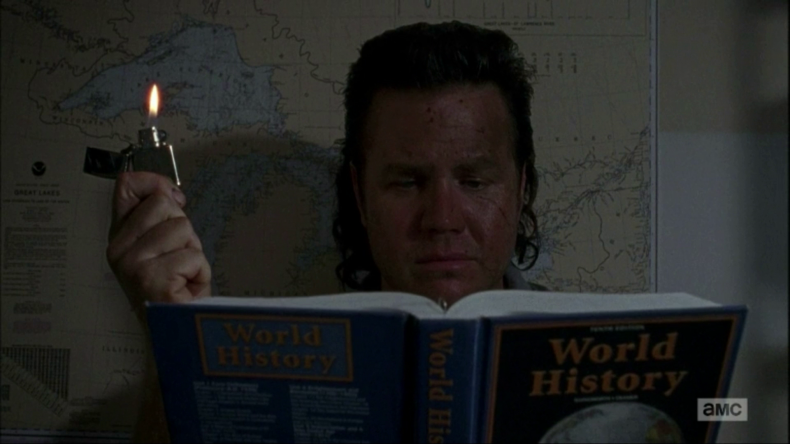 One of the oddest cold openers we’ve seen in a while started this one out. It was the creepy little sheltered kid Sam, coloring in a picture while an old record player plays an even older recording of “Tiptoe Through The Tulips” that sounds like it came from Bioshock Infinite. Then we pan to an army of ants coming through the window, and we see they’re devouring the half-eaten cookie he’s left on a plate in the corner of the room. Opening credits! ……Ooookay.

We see Sam periodically after this. It’s always in his room and he’s always playing that “Tulips” record, over and over. I had no idea why he didn’t put on something else, but Jason Alexander suggested during Talking Dead that “Tulips” might well be the only record Sam owns. I could buy that.

The Walkers pour in, everyone runs for their lives, and our major players wind up divided inside two separate houses. Rick, Michonne, Queen Deanna (who was unfortunately bit on the way there) and others are now in Sam’s house, while Morgan, Carol and Fake Doctor are now hiding in that place Morgan hid the Wolf. It’s no longer a secret, and Carol is NOT happy. 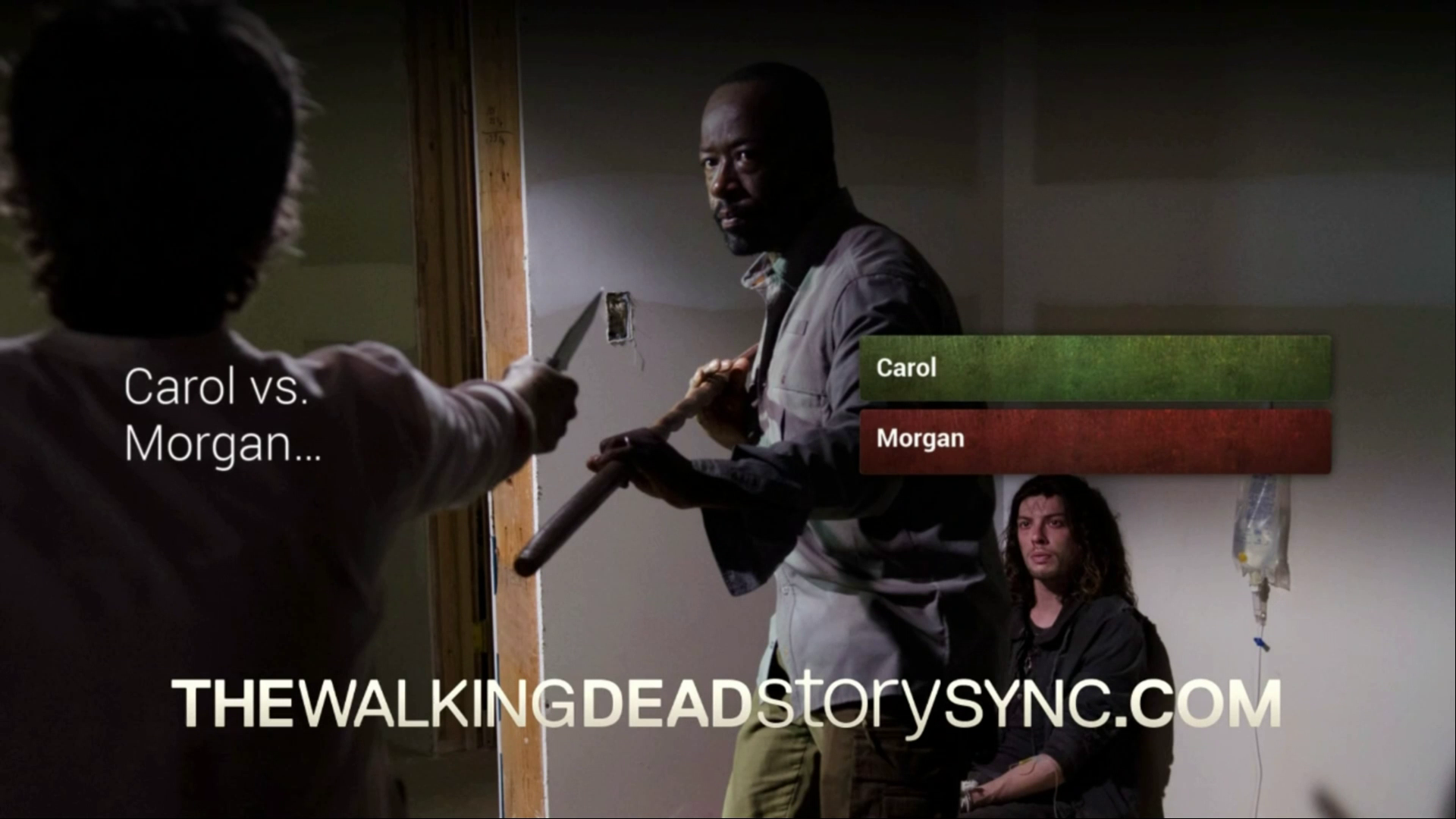 In fact she’s SO not happy that she gets into an all-out skirmish with Morgan over the Wolf’s life. Some might complain about the circumstances, given there should be something else at the moment that requires everyone’s attention, but in this case, I think it’s a bit believable. Carol is now trapped in a house with a psycho who, though tied up at the moment, openly admits he wants to kill everyone in the village. Of course she would elect to do him in, because that’s Carol’s style. And of course Morgan would interfere, because that is his. “Carol vs. Morgan” is a terrific idea for a fight anyway. 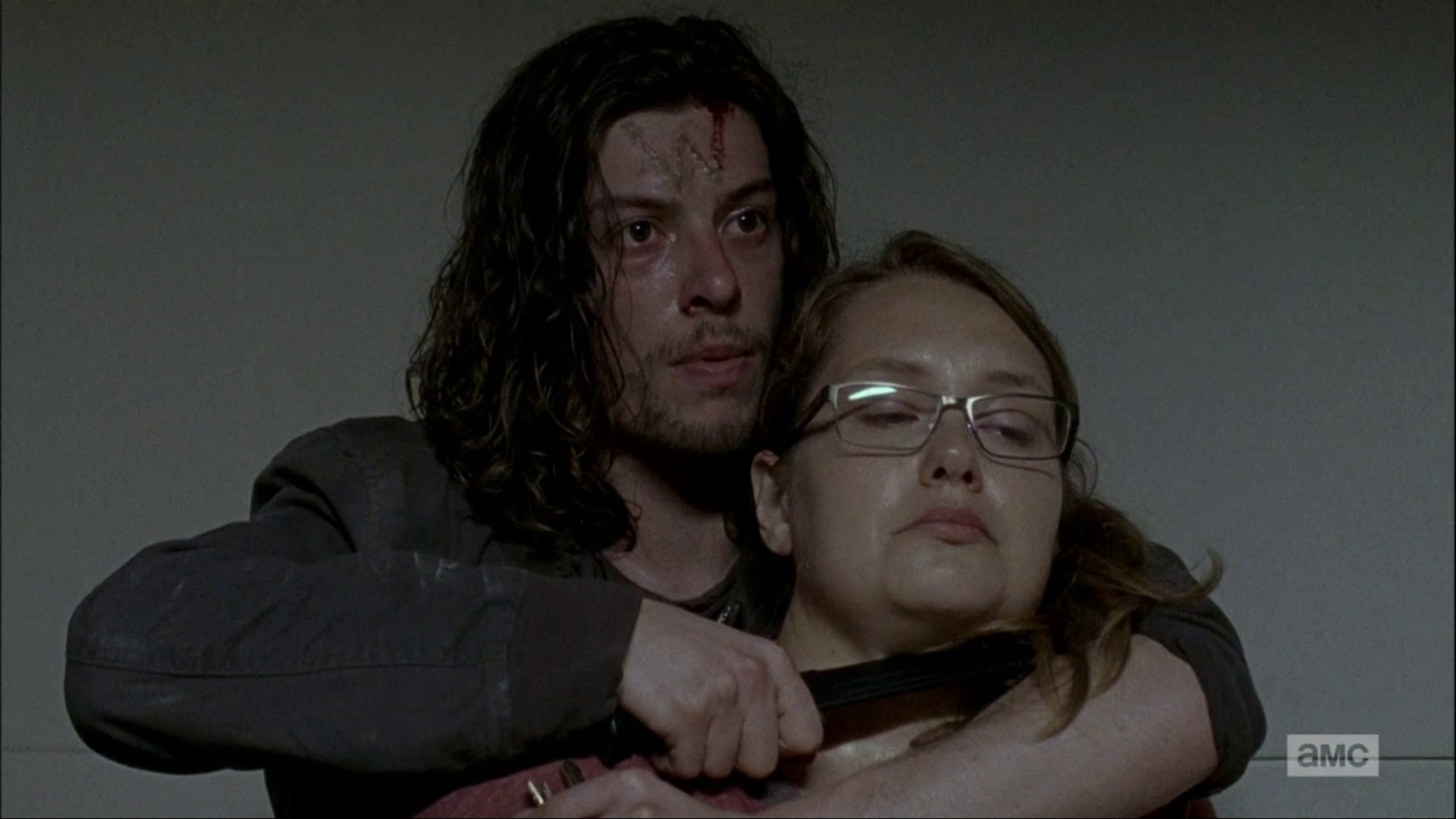 This is something I’ve noticed about fiction: typically, the hero is someone who values all human life and would never kill the villain because killing is what bad guys do, and they’re the good guy. Everyone would agree that “don’t kill” is a good lesson, but if you think about it, it’s not absolute. In life-threatening situations where a terrorist or a madman is after you, killing him first is the only way to survive if you can’t escape. This is why it’s legal to shoot a guy who wanders into your home uninvited. How many times has the Joker come right at Batman with the full intent to kill him? True, Batman has the reflexes to dodge him, but the truth is, no court would ever convict Batman if the Joker wound up dead from this. It’s a clinically insane man with a rap sheet a mile long packing razor-sharp playing cards and poison-squirting flowers. Self-defense, case closed.

So Morgan won’t kill this guy, and I understand why, but when we get to the stage where the Wolf is holding Fake Doctor hostage with a knife to her throat, we’re at the point where any trained officer has a license to shoot. And since there are no cops around, Morgan probably would have been justified breaking his moral code at least once. But no one does anything, and the Wolf is able to get out…….somehow…..and……where exactly does this guy think he’s heading? Everyone is barricaded in houses for a reason! If the season starts back up next year and we see him somewhere outside of Alexandria with no problems, I’m gonna scream. 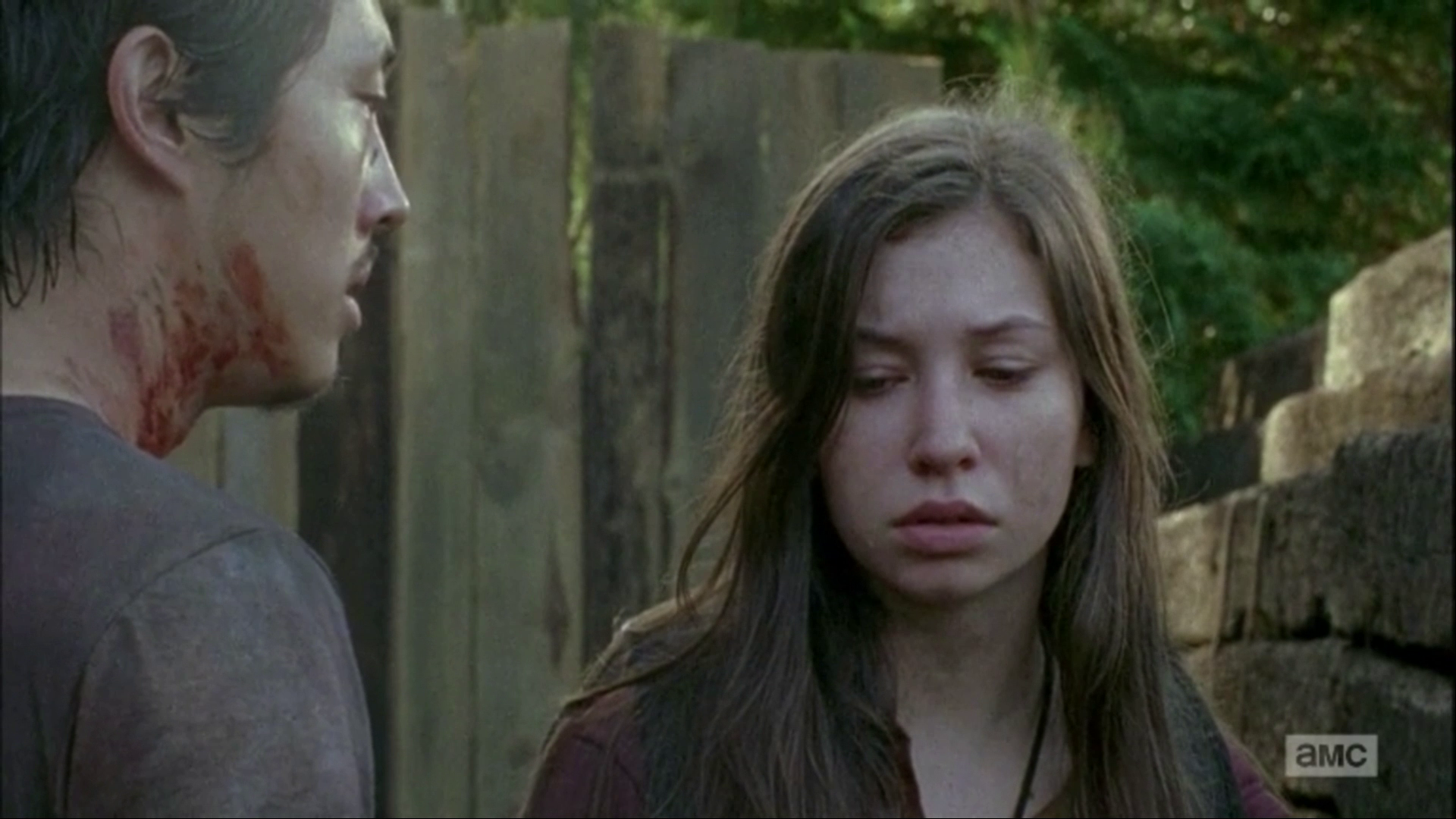 The scene with Glenn and Enid discussing how to get inside was already shown on the Internet as that week’s sneak preview clip, and it turns out that was nearly all the Glenn and Enid we were going to get. We get a brief shot later of the pair scaling the wall, and they do notice Maggie trapped on the scaffolding….and that’s it. I’m assuming that went all right.

Carl and Ron wind up in the house Rick and company are in, but they enter through the garage. It’s just them alone in there. Silly me thought the panic over this life-threatening situation would make Ron realize how petty his own act of revenge is, and that he would start working together with Carl to survive. At least that’s what any actual human would do, even the “dumb teenager” type. Ron, it turns out, is that special type of dumb teenager you only see on TV and want to strangle every time he shows up. Ron actually sticks to his original plan, despite EVERYTHING, despite ANY NOISE ATTRACTING HIS OWN DEATH….despite all common sense, he points his gun at Carl, and becomes the most hated currently-living person in the series. Father Gabriel should be relieved. 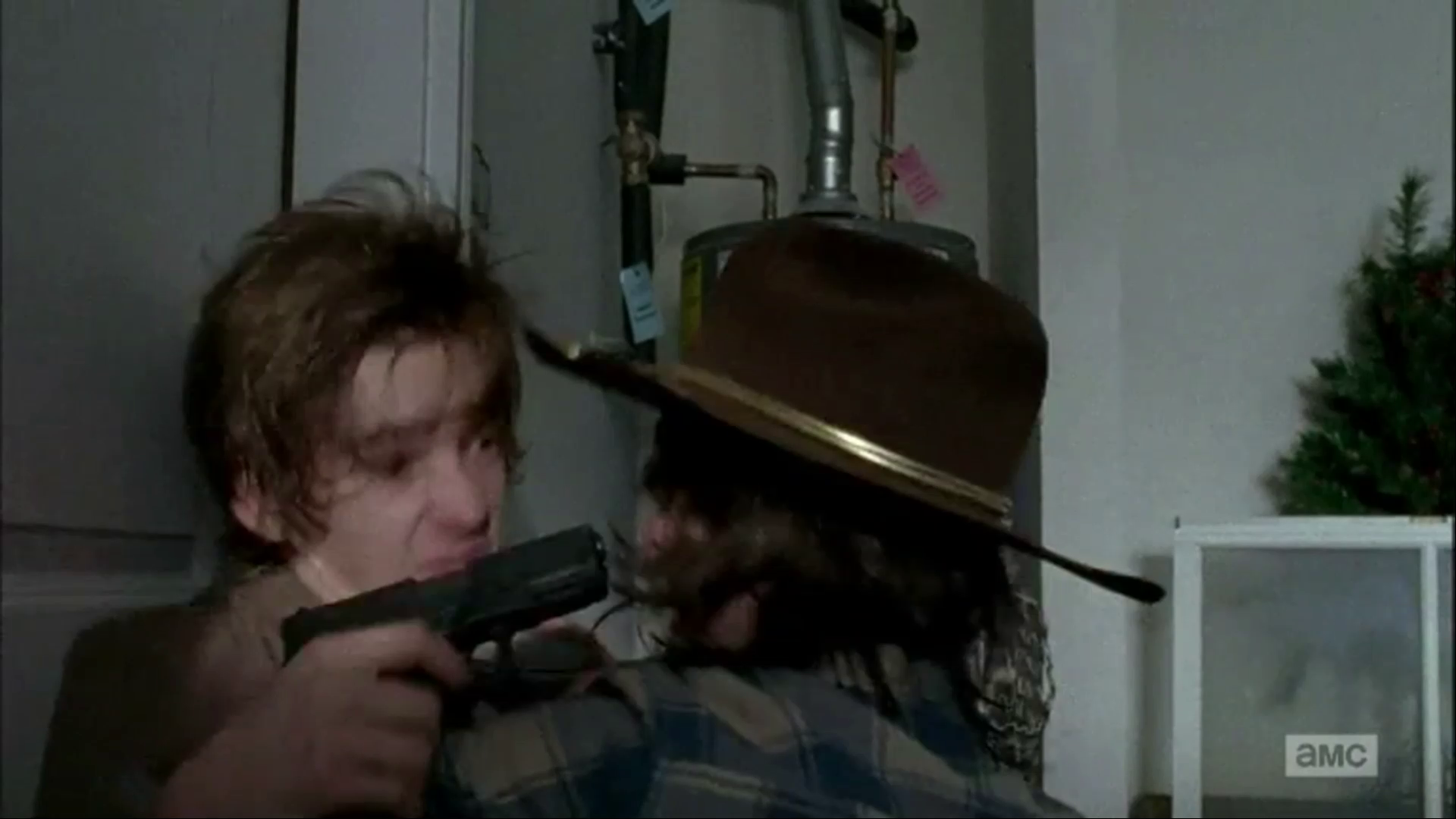 Things look hopeless when suddenly, Rick suggests the one thing I have been waiting seasons for anybody to have to sense to try again: they’re going to cover themselves in zombie guts so the other Walkers can’t smell their fresh meat. This technique was first tried all the way back in Season One, Episode Two, and though it didn’t quite work, that was because it rained. It has very rarely rained since in the Walking Dead universe, and the skies are currently clear over Alexandria. Now…….WHY DIDN’T THEY THINK OF THIS WHEN THEY WERE SAFE AND TRYING TO GET ACCESS TO A CAR OUTSIDE TO DISTRACT THE ZOMBIES AND DRIVE THEM OFF?? That was a much better solution than a loose grappling hook (speaking of which, we didn’t see Spencer at all this episode, maybe he’s dead. Good.) 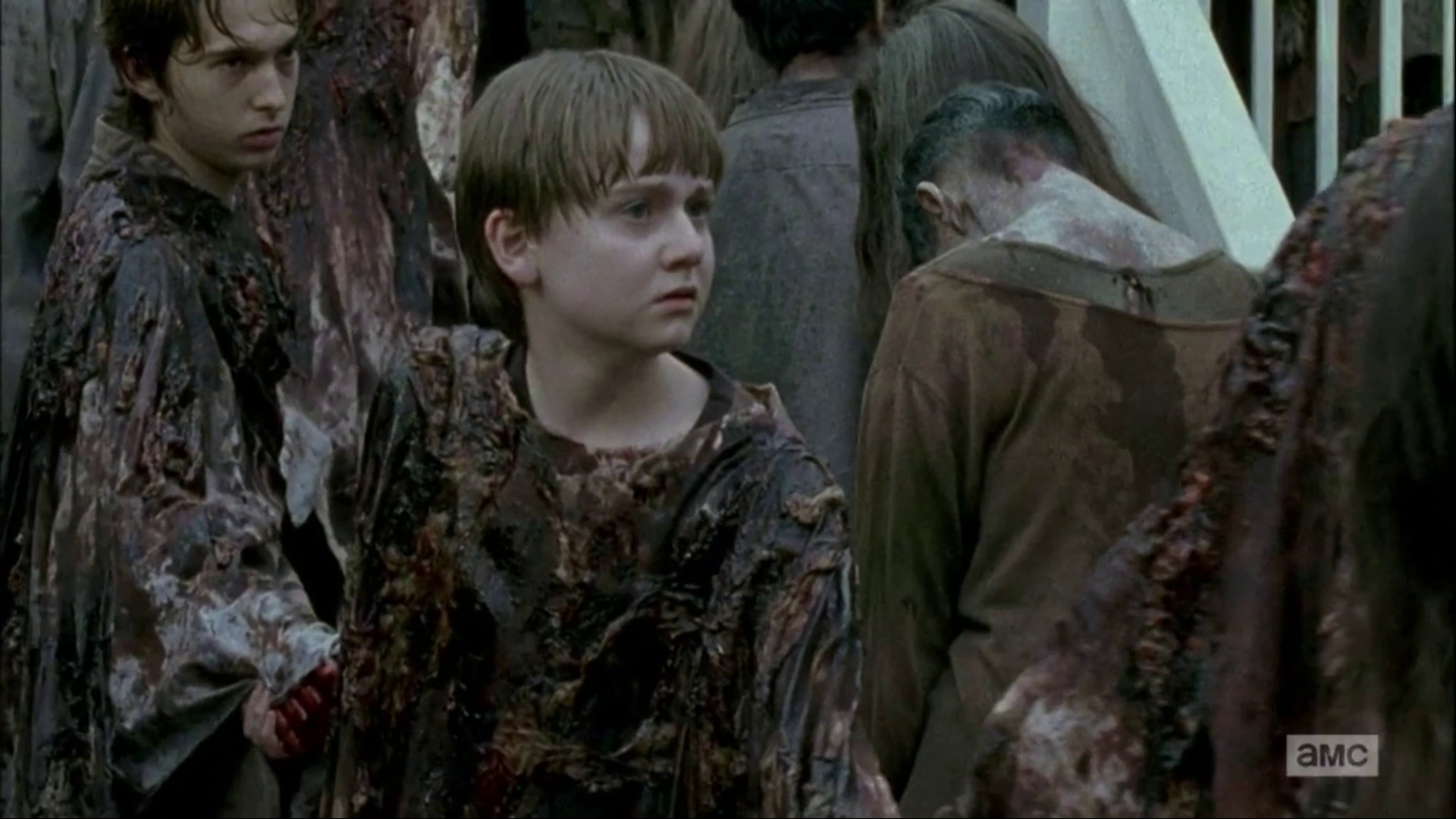 This is when creepy Sam of the Corn finally steps into view, having finished his 1,273rd playing of his Tulips record and eaten his ant-covered cookie. He needs something new to do. And his mother is one of the most irresponsible people in the show’s history for not preparing him for this at all. In the span of seconds he suddenly realizes the house is surrounded by monsters, one of them is lying dead and gutted on the floor, and all his adult guardians are nightmarishly covered in its entrails. You can imagine how he feels when he’s directed to put on a poncho covered in said guts. Sam is THE most sheltered human in Alexandria, and it’s about to royally bite everyone in the ass.

After everybody gets gored up and heads out into the crowd, Queen Deanna sacrifices herself as a distraction (which wasn’t necessary, but it’s the thought that counts, I guess). Everybody nudges their way outside in slow motion, none of the undead notice, and they would have gotten away with it if it weren’t for that meddling kid. The last thing we see before the show cuts to black until February is Sam yelling “Mom? MOM? MOM??” Well, this better be important.