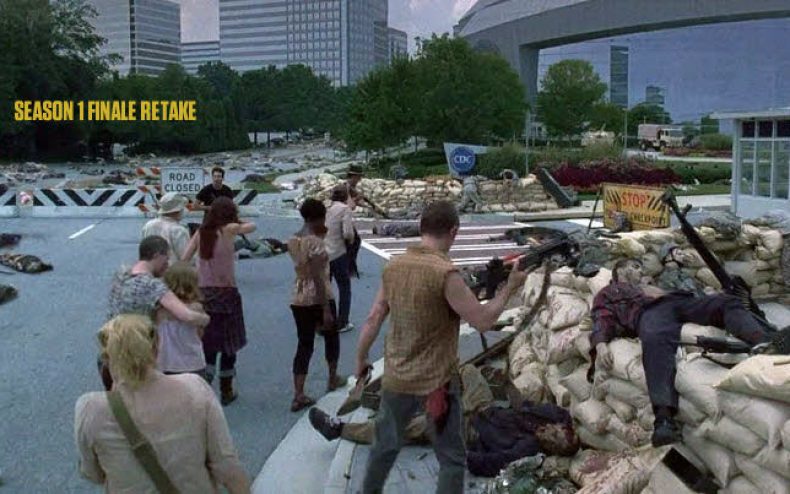 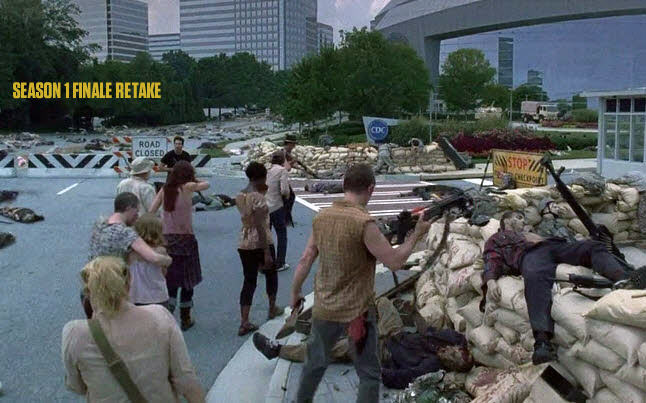 This is my attempt to show how the season one finale, Wildfire, could have been done smarter, keeping the basic ending. The quotes from the show are taken from closed captioning on the DVD. It begins about 30 minutes into Wildfire (the fifth episode of season one). The group has just stopped to consider what to do about Jim. Shane and T-Dog have gone on ahead to look for parts for the RV.

T-Dog jumped out of the Jeep almost before it came to a stop, looking around for something that may have the parts needed to repair the RV.

Shane: Yo T-Dog, lets stick together. No reason to hurry here, lets check it out slow.

T-Dog: Why? You see somethin’? (brings shotgun up to a more ready position)

Shane: Naw, I just know Rick. He’ll be talking to the others about Jim for a while. We got time.

T-Dog: Yea I got that feeling from him too…… What do you think about that old green van? Think it might have the right size hose?

Shane: Don’t have the slightest idea, Pop the hood and we’ll look.

T-Dog tries the driver side door. It’s locked. As he pulls back the shotgun to bust the window Shane interrupts.

Shane: Lets try the other doors first. Gotta be quiet like.

They try the other doors, looking in the windows as the go around the van, All the while keeping a eye out for walkers.

T-Dog: All locked and that sheet is blocking us from seeing the back.

Shane (as he unscrews the antenna from the van): If a walker was in there it would’ve been trying to get us by now.

T-Dog: What’s that for? (points to the antenna)

Shane: Watch. (whips the window and it shatters with noticeably little noise, But as Shane turns to say something to T-Dog, the barrel of a Glock points at him from inside the van)

T-Dog: Hold it right there (As he levels the shotgun at the dark figure in the van)

The figure is obviously still blinking the sleep from his eyes.

Figure: you guys are alive.

Figure: Your cap. My names Casey (Lowers pistol, but doesn’t put it away)

Casey opens the drivers door and steps out, blinking in the light (Pistol is still out): What’s with busting the window?

Casey: Not from this heap, Someone stripped the engine for parts before I found it. The only reason the hood is closed was so I could look out if I heard something.

Shane: Mind if WE check.

Casey: Knock yourself out. It’s not mine.

Casey: Yea. I was visiting my parents in Florida when they shut down travel. After…. Well I’m working my way back home in Pennsylvania.

T-Dog: PENNSYLANIA!! You’re crazy if you think you can make it that far.

Casey: Didn’t have anything better to do.

Shane: We’re heading to the CDC. (See’s Casey has noticied the RV way down the road)

Casey: The CDC. You realize that’s in Atlanta? One of the largest cities in the south?

Shane: It was either that or Fort Benning.

Casey: Benning’s dead. They were overrun.

Shane: How do you know?

Dale said the radiator hose was more duct tape than hose and he was out of duct tape. We’ll say Casey had some, to get them back on the road. And since they are heading north Casey took the ride in trade for the duct tape. Now we move ahead to outside the CDC. Casey grabbed an M-4 and 2 mags off one of the dead soldiers.

Rick: Well, they probably emptied the clips while being overrun.

Casey: No, it’s dry, no lube. (Casey slings the carbine and pulls out his Glock) and it’s a magazine not a clip.

Inside the CDC elevator.

Daryl: Doctors always go around packing heat like that?

Jenner: There were plenty left lying around. I familiarized myself.

Casey: (interrupting) Call it my OCD, I want, No NEED to get this up and running.

Casey: Thanks, By the way doc, you should take the lens caps off that optic if you think there may be trouble.

Casey: Once upon a time.

Dinner after Shane asks when Jenner is going to explain where everyone is.

Glen: Dude, you are such a buzz kill, man.

Casey: It’s gonna get worse. Everyone stop drinking. I saw the clock, I know a countdown when I see it. It was at 18 hours 50 minutes, we have less now. What happens at zero?

Jenner: The basement generators run out of fuel.

Jenner goes to leave, but is blocked by Casey and then Daryl.

Daryl: Come on Doc, What happens?

Shane: What does that mean?!

Jenner: Do you know what this place is? We protected people from very NASTY stuff! Weaponized smallpox, Ebola strains that could wipe out half the country! Stuff you don’t want getting out!! EVER!!! (Collects himself) In the event of a catastrophic power failure, in the event of a terrorist attack, for example, HIT’s are deployed to prevent any organisms from getting out.

Casey: Son of a bitch

Jenner: (surprised) It will actually set the air on fire.

Rick: How do we stop them?

Casey: We don’t. For the job he said, they’ll be tamper proof, at least beyond our capabilities. Any attempts will probably cause them to detonate.

Shane: We need to get out of here NOW!!

Daryl: I ain’t listening to a crazy man.

Casey: Ok, we leave at the 15 hour mark. It’ll be daylight then.

T-Dog: Why not get the hell out now?

Casey: Because we have work to do. Doc, can we refuel the generators?

Jenner: I used all the fuel.

Casey: what about outside? The generators are diesel, right? (Jenner nods) can we get fuel from the 2 tanks outside?

Jenner: The soldiers did that just before we were overrun. Everything out there is dry.

Casey: OK, Rick, Dale go check the Generators. Look for a way to refuel them from outside if we think of something. Shane, T-Dog, and I will go to the armory. Glen, Daryl scavenge all the rooms and storage closets for bags or backpacks and meet us there. Lori, Carl, Andrea hit the kitchen. Find all the dehydrated, freeze dried and powdered kind of food you can. Put it in boxes and take in to the hallway by the main elevator. Carol, Sophia and Jacqui hit the laundry get clean clothes and pillow cases, we can use the pillow cases as bags. Put them in boxes with the food. Then I want your groups (points to Lori and Carol) to get all the drugs and medical supplies you can, Doc will help with that.

Jenner: What am I going to do before that? (Jenner has a little smile, he is happy NOT to be in charge)

Casey: You’re going to download all the data you have on this thing into some kind of portable storage.

Casey: Carl you get one and so does Sophia.

Lori: (angrily) Why them?

Casey: They’ve got to carry something, so why not. They’re hard drives not bombs. Doc, you’re with me.

Shane: Leave it. Waste of ammo. Here’s a couple of spare bolt carriers for the M-4’s

Casey: Two piles. ‘Must go’ and ‘Would be nice’ The machine gun isn’t in either, it’s more of a if we can. the M-4’s are ‘Must go’ as well as every 5.56 round. Why are there Glocks here, I expected Barrettas?

Shane: Those threaded barrels mean what I think!

Casey: Look for them!

T-Dog: Anyone want to clue me in?

T-Dog: Why would they have silencers?

Jenner: Makes sense, The ‘walkers’, as you call them, home in on sound. Reduce the sound, less walkers come after you.

Casey: Only 400 for the SR-25. We may have to ditch everything but Weapons, ammo, food and medicine…. What’s in those boxes?

Jenner: I hope you will restrain yourself.

Casey: With the suppressors and the NVG’s we may be able to do two or three trips trips while it’s dark!

After 3 trips the vehicles are full, if low on fuel. Jenner, Jacqui, and Andrea announce the intention to stay. Dale convinces Andrea to leave. The episode Wildfire continues.

When does Season 3 of The Walking Dead Start?

What Is “The Walking Dead” About