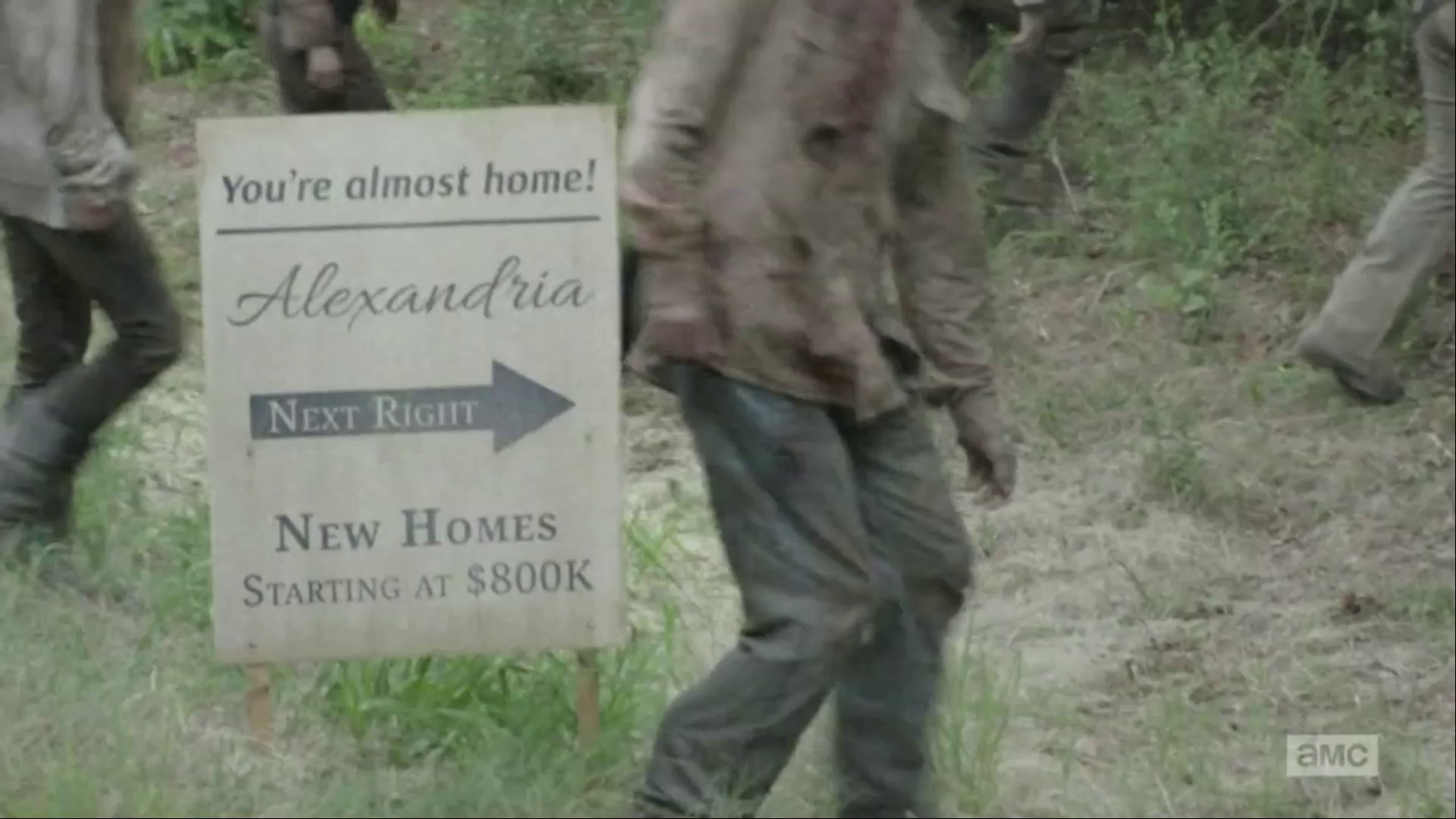 For the first five minutes of this episode’s premiere, AMC was coming in as a blank screen. When it finally blipped back on, I had no idea why there were suddenly ten kerbillion Walkers stumbling around, nor why the posse would want to lead them in a straight line toward Alexandria. Then everything went black and white and I thought that was also my cable provider’s fault.

It turned out that losing five minutes didn’t make my experience any more confusing than anyone else’s. If you hadn’t been watching all the promos and absorbing every spoiler you could find, you would have no idea why it suddenly felt like we skipped four or five episodes.

The answers were gradually given out in monochrome throughout the 90-minute running time. The story really began right after Rick shot Pete. The townspeople thought that despite being a killer (Pete, I mean), the man should be given a proper burial. Rick’s idea was to throw Pete in a garbage dumpster outside of city limits, but he was overruled. 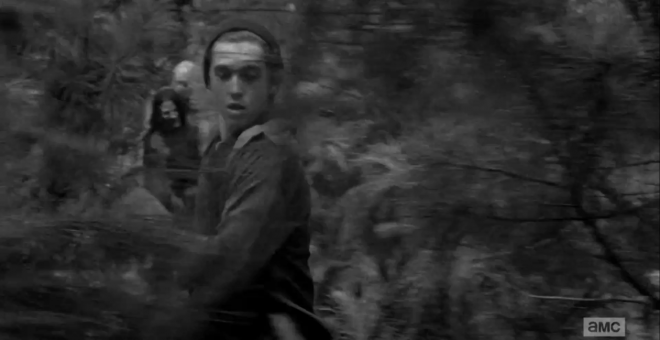 Rick reluctantly agreed to the burial, but as a compromise he got to dig Pete’s grave in a place outside Alexandria. Pete’s son Ron decides to follow Rick because, well, his own dad is getting the sorriest funeral possible by the guy who shot him in the face. Ron is taking this better than a boy should, but he would at least like to know WHERE the body is, so he can come back and pay respects when he’s 50.

While he’s sneaking around and watching, a Walker comes up behind Ron. Ron yelps and runs for his life, being pulled out of the way by Rick JUST before he would have tumbled down into a deep quarry. It turns out to be a very interesting quarry indeed….there are at least ten thousand Walkers shuffling around at the bottom. Someone boxed them in earlier with trucks, and the noise they made attracted more Walkers, who fell into the pit and made MORE noise, which attracted MORE Walkers, ad infinitium….and this, in a nutshell, is why Alexandria is untouched. But as Rick examines the area with his binoculars, he finds things won’t remain that way. The undead have managed to push the trucks enough to make a small opening, and they’re starting to trickle out. 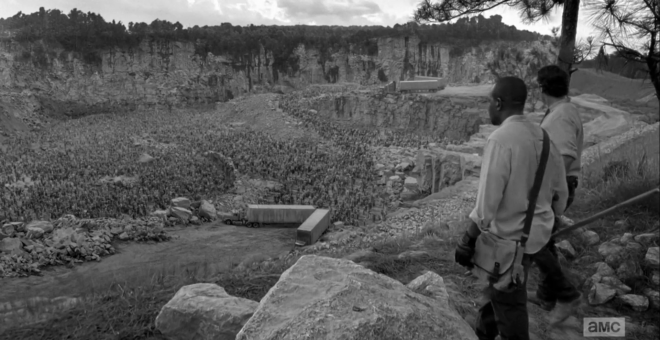 Grimes suddenly realizes one hard rain could make a truck slide in the mud and tumble into the quarry, opening the path for all those Walkers to ravage the town without warning. It’s a ticking time bomb, and the posse has to find some way of defusing it without blowing it up. 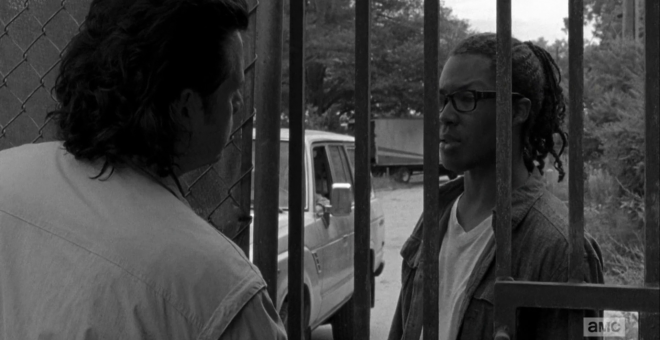 The rest of the flashbacks have to do with prep work to put Rick’s plan into motion, but at one point, a guy named Heath shows up at the gate. He claims he was a resident of Alexandria and has been on an errand for weeks; Eugene believes Heath and lets him in. We didn’t see much of Heath after this (and we saw nothing of him BEFORE this), so we can’t really make any judgments on him. What do YOU think his deal is? Is he a good man or is he a horn-honker?

Then Heath asks Eugene what’s been going on lately, which unbeknownst to him is quite the loaded question.
“You might want to talk to Deanna, and get it from the horse. Her mouth. You know.”

I’m really, really hoping he was supposed to say “horse’s mouth” and flubbed the line mid-delivery. Also, I’m calling Deanna The Horse from this point. 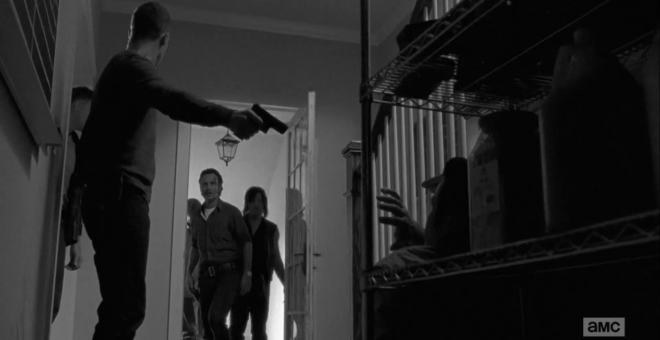 Today’s death was that of the Alexandrian Carter, and it was of the Ironic Variety. Carter was caught trying to organize a mutiny, first by Eugene, who clumsily backed into a bunch of noisy pots and got a Glock aimed at his head. Then he was double-caught by Rick, who walked in the door just as Carter was aiming the gun at Eugene. Rick threw Carter to the ground and prepared to execute him, but decided against it. Later on, miraculously, there’s a scene where Rick & Carter shake hands and Carter admits “you were right.” Right after this Carter is bit by a Walker and has to be put down by Rick. Fate basically said, “Rick is shooting you and that’s final, so there.” 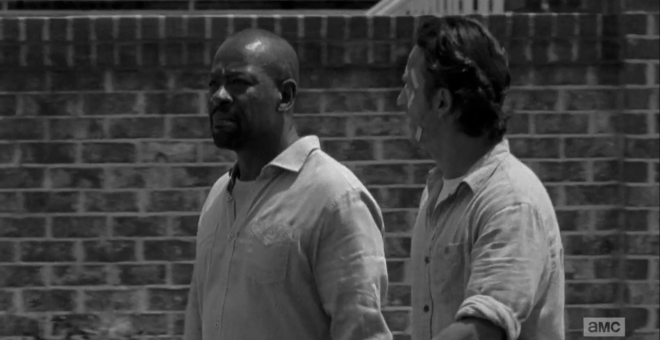 The episode also brought with it the usual amount of stuffing (AKA character conversations that affect little), but the one interaction everybody was waiting for was Rick & Morgan. They converse throughout the episode whenever they have time. Morgan is rather put off by the way Rick has changed, but he doesn’t have much of a leg to stand on, as Morgan was the off-putting one two seasons ago when he and Rick last met. They’ve both been driven to the deep end by their situation in life, and on this they found common ground. This time Morgan played the optimist. 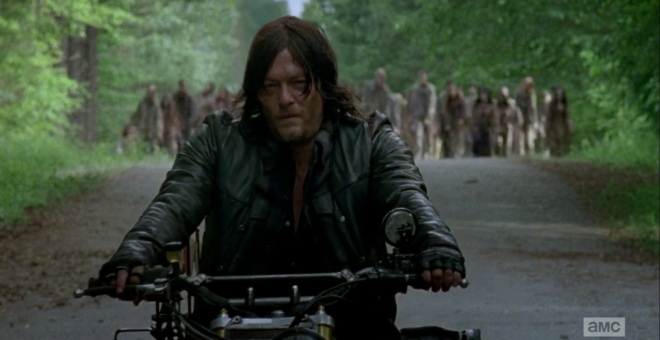 Meanwhile, in Technicolor: Daryl leads the Walkers out of the quarry in a line, directed by the roar of his motorcycle. Abraham and Sasha precede him and make sure none of the Walkers start going off-course. Glenn and Heath are miles away, dealing with a small building full of Walkers that could potentially cause a distracting noise if left alone. Michonne is at the fence, firing a flare gun repeatedly in a non-fence direction. This is what you call a pins-and-needles episode, as any one of these elements could go south quickly. The result was what may be the first 90-minute episode that didn’t feel like 120 minutes — more like 60.

Glenn succeeded in getting rid of the Walkers in the building. Michonne successfully prevented them from trampling down the fence. They were inches away from the biggest victory they’ve ever had, when suddenly—some clown in the distance started honking a loud endless horn. After a moment of shock, the posse realized the noise was coming directly from Alexandria — who would be crazy enough to sign the town’s death warrant, while inside it? 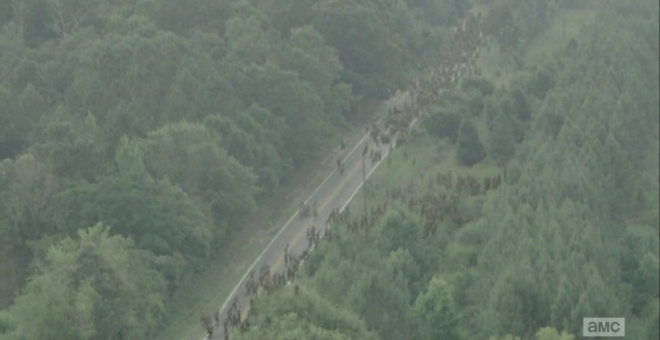 This is one of the better cliffhangers the show’s return has provided us. We know Alexandria’s going to be toast now — we’re past the point of no return. We also know the odds are worse than they’ve ever been for Rick and crew, going by the sheer volume of zombies they have to deal with. In addition, many of these people have never been outside of the sheltered city and don’t know how to fight.

Quite a nasty situation. But Rick is our leader, and clearly there is no man more capable for the job, nor was there any idea brighter than his.

Also, alternately, they could have tried this: 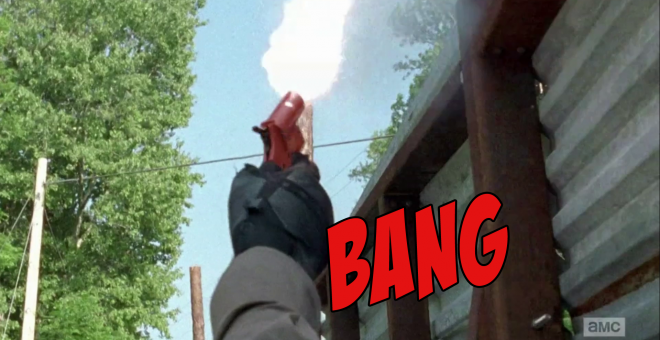 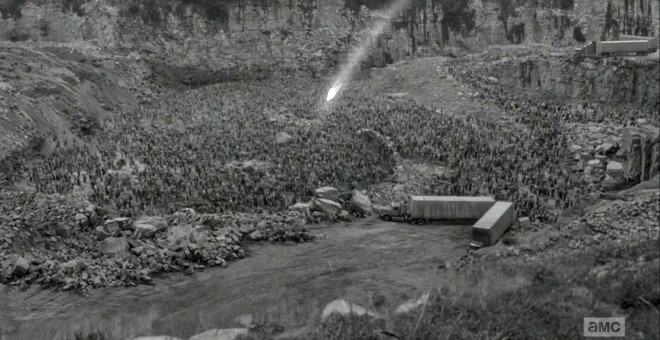 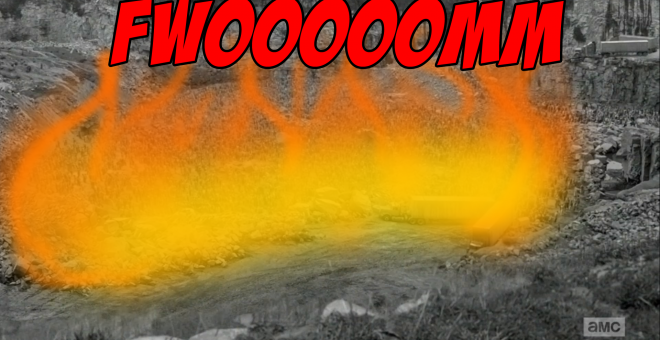 But who am I to question Rick? Please don’t kill me, Rick.