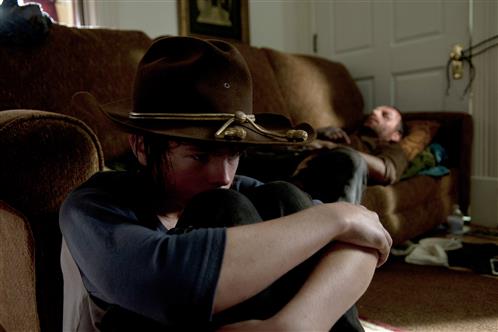 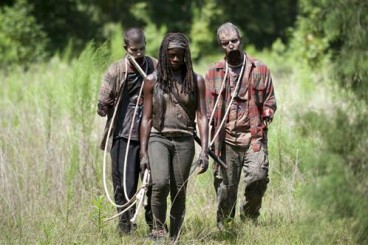 Our favorite show returns with the mid-season premiere, “After“! This episode focuses on three survivors and the struggles they face after the fall of the prison and separation of the group.

“After” starts out with Michonne looking at the destruction of the prison. We see walkers surrounding the area, smoke trailing from the destroyed tank as well as from the towers and prison itself. Everything they had known and loved is gone, throwing them once again into the chaotic and apocalyptic world they had almost forgotten.  She leads two walkers astray and makes them her new “pets” by cutting their arms and jaw off (so they cannot harm her).  She ties a rope around them and begins using them as cover to blend in with the other walkers. As she’s heading out, she sees the reanimated head of Hershel Greene moving on the ground. In an emotional scene, she puts her friend to rest.

Meanwhile, Carl and Rick are walking down a road towards Joe Jr.’s BBQ Shack. Inside, they find a barricade of tables and chairs set up with a note saying “Please do what I couldn’t”. Behind a counter, Joe Jr. steps out, now a walker and looking pretty hungry for some meat. Unfortunately, it’s not for barbeque variety. Rick tells Carl that he’ll kill the walker with an axe, that it’s important to save what was left of the bullets. Rick struggles with Joe Jr. and though he tells Carl not to, the boy shoots the walker in the head.  We begin to see that the relationship between father and son is strained. They separate to scavenge for food. Carl comes back with a little bit more. “I win,” he tells his father.

Needing shelter, the two approach a house and begin to search it for walkers. Rick wants the two of them to stick together but Carl seems intent to show his father that he doesn’t need watched. He bangs on the wall, cursing loudly, much to Rick’s shock and dismay. He tells his father that if there were any walkers there, they would have responded to the noise. Carl heads off to search the house on his own and comes across the bedroom of a teenager boy. He briefly shows excitement at a stack of video games before catching his reflection in the television, reminding himself that he was no longer a child, that this was no longer a normal world.  He returns to his father and the two argue again, this time over eating some food, before Rick heads towards the bathroom. He takes off his shirt to check his injuries in the mirror. The gunshot wound doesn’t looks pretty bad, but at least the bullet exited the body.

Though Michonne notices Rick and Carl’s tracks, she decides to go off on her own  and ends up camping inside of a vehicle for the night. In a dream, we see her in a kitchen with her partner, Mike and his friend. While cleaning knives, a katana suddenly appears in her hand. She wipes it down and returns it to the knife rack, reality clearly distorted. She picks up her son and joins the men at the table. They begin talking about the apocalypse and Mike is visibly upset. He begins questioning why they even try living in this world. “Are we just kidding ourselves? What are we going for? Where’s the happy ending? Why?,” he asks her. The dream suddenly takes a dark turn. Her son gone and the two men are sitting lifeless at the table with their arms cut off. Now we know where she got her first two “pets”.

Back at the house, Carl wakes up and pours himself a bowl of dry cereal. After breakfast, he begins to notice that his father hasn’t moved. He begins shaking him and yelling at him to wake up, which draws the attention of two walkers who begin banging on the door.  Carl sneaks out the back and begins to lure them away. He backs slowly down the road and onto a nearby path. Intent on the walkers in front of him, he misses the one sneaking up behind him until it’s mere inches away. Carl falls to the ground in a panic and five bullets later, he’s pinned under a trio of dead bodies. He pulls himself out and vomits before declaring out loud, “I win.”

Michonne is walking along, right smack in the middle of a herd of walkers. She glances back and spots one that somewhat resembles herself. She looks away, upset at what she had seen. When she glances back, it’s a completely different walker. Was it an hallucination all along? Is she beginning to snap, crackle and pop?

At the house, Carl begins to yell at an unconscious Rick. He tells his father that he knows how to survive and that he doesn’t need him anymore. He blames Rick for what happened at the prison, angry that his father couldn’t protect Judith, Hershel, and the rest of the group, including his mother. “Now you’re nothing. I’d be fine if you died!,” he yells before storming off.  In a nearby yard, he pulls a small lamp from the ground, the end sharp enough to be used as a weapon. With some difficulty, he breaks into a neighboring house and begins to look around. We once again see a glimpse of the child inside when he spots a large can of chocolate pudding in the kitchen.

He continues his search of the house and heads upstairs. He finds a dead bird in one room and a walker in another. He tries to shut the door on the walker but it quickly over powers him. He fires off the last of his bullets, all failing to kill the walker. He runs into a bedroom nearby but cannot get the window open.  The walker catches up and the two begin struggling. Carl falls on the floor and just as it seems like a bite is going to be taken out of his ankle, he slips out of his shoe and escapes the room. He shuts the door and picks up a piece of chalk. On the door, he writes, “Walker inside, got my shoe, didn’t get me.”

He climbs onto the roof  and claims his reward! All 112 ounces of it.

We see Michonne still walking with the herd and once again, she catches a walker that resembles herself. In a rage, she decapitates it. Unfortunately, this blows her cover and draws the attention of the herd. Seeing her now as food, they begin to move in. Despite looking exhausted, she quickly dispatches the herd, saving her “pets” for last. She has a slight emotional breakdown. It’s tough being alone.

The next morning, Carl wakes up to find his father’s hand twitching. Rick is also breathing is heavy, the sound eerily similar to that of a walker. Carl grabs Rick’s gun and scurries a few feet away, aiming it at his father. Rick reaches out towards his son, giving Carl even more reason to believe his father as turned. He begins sobbing and says he can’t do it. He can’t shoot his father. He admits that he was wrong. “Just do it,” he says, willing to let his father bite him. Rick grabs his son’s ankle and weakly tells him not to go outside. He tells his son to stay safe before passing back out. Scared, Carl realizes he needs his dad after all.

Michonne arrives at the BBQ shack and finds the note that Joe Jr. left behind. She sits on the floor and begins talking to Mike. She tells him that she knows “why“.  She picks up the tracks of her friends and soon comes across an empty pudding can in the street. She peeks into a window of the house nearby and spots Rick and Carl. She begins to cry again, but this time out of happiness.

Rick and Carl share a touching moment over breakfast. “You’re a man, Carl,” Rick acknowledges before adding, “I’m sorry.” Carl tells him that he has nothing to apologize for. There’s a knock at the door and Rick gets up to glance out the peephole. Smiling in amazement, he turns to Carl. “It’s for you,” he tells his son, ending this episode on a positive note.

Like many, I had waited a couple months for the return of this show and “After” didn’t disappoint. I’m certainly glad that Rick is alive! While I read the comic books, you never know what kind of curve ball will be thrown at you in the television series as they like to keep us the edge of our seats! The only thing I could complain about is the lack of other survivors. On the other hand, I feel like we got to see a lot more depth to Michonne, Rick and Carl because of the focus on them that this episode provided. I felt especially drawn to Michonne.  Despite encountering great loss in her life, she finds solace in her friends and they drive her to move forward. In a way, our friends do become family.